For many years, when anyone asked me to recommend a study Bible, the choice was clear: the NIV Study Bible.  Following its publication in 1985, it quickly became the best selling study Bible in the English language.  Unlike study Bibles that were the product of one man's scholarship, the NIV Study Bible was the product of a broad representation of the leading evangelical scholars of the day.  It was built around the 1984 edition of the New International Version, which had become the #1 selling Bible translation.

Containing more than 20,000 in-text study notes and a 130-page topical index, the NIV Study Bible covered a range of study interests: character study, archaeology, and personal application.  For me it struck the right balance of scholarship and practical commentary.  It was a Bible I quickly chose as my favorite Bible for preparing sermons.

I had already adopted a preference for the New International Version since the translation first appeared in 1977.  One of my professors in seminary, Larry Walker, served on the Committee on Bible Translation, and made sure that we had exposure to the 1977 and 1984 editions.  Dr. Walker continues to be a member of the CBT, which is the executive committee for the NIV translation.


I am referring to the NIV Study Bible in the past tense because, in 2011, Harper Collins, owners of Zondervan, began publishing a new version of the New International Version--essentially a new translation.

I was not a fan of the abortive Today's New International Version, (TNIV--New Testament published 2002, complete Bible 2005), which met with profound resistance from the evangelical community.  Unfortunately, the 2011 NIV hews more closely (an estimated 75% of the time) to the TNIV rather than the 1984 NIV.  (I'll say more about the 1984 vs. the 2011 NIV translations in a future post.)


Once the 2011 version was issued, the 1984 copies were either recalled by the publisher or quickly sold out.  Fans of the 1984 NIV saw the change coming; and 1984 NIV Bibles (especially the 1984 Study Bible) became collectors items.


By 2014, it looked like all the 1984 NIV Bibles were gone.  Then Cambridge University Press  found a supply in a warehouse and contacted evangelicalbible.com about being the exclusive vendor for this remaining stock.  This offered readers one last chance to acquire a copy of the venerable and highly-respected 1984 NIV.  The inventory acquired by evangelicalbible.com included four styles:  The NIV Study Bible, the NIV Single Column Text Edition, the NIV Wide-Margin Reference Edition, and the Pitt Minion Edition.  This review is only going to cover the two styles I own.

First, the NIV Study Bible:  Evangelicalbible.com has copies of the NIV Study Bible in black and burgundy goatskin.  If you have never handled a Cambridge goatskin Bible, you have missed a delightful experience--soft, supple, while, at the same time, the most durable Bible cover you can buy.  The Cambridge goatskin NIV Study Bible has other deluxe features: art gilt edges with red die infused under gold gilding.  This gives the Bible's edges a gold appearance when it is closed and a reddish hue showing through the gold when opened.  This not only gives the Bible an aesthetic appeal that is a notch above typical gold gilding, it adds a layer of protection to the  page edges.  The Smyth-sewn binding means the Bible pages are sewn into the binding in a way that provides greater durability while allowing the Bible to lie flat when opened. 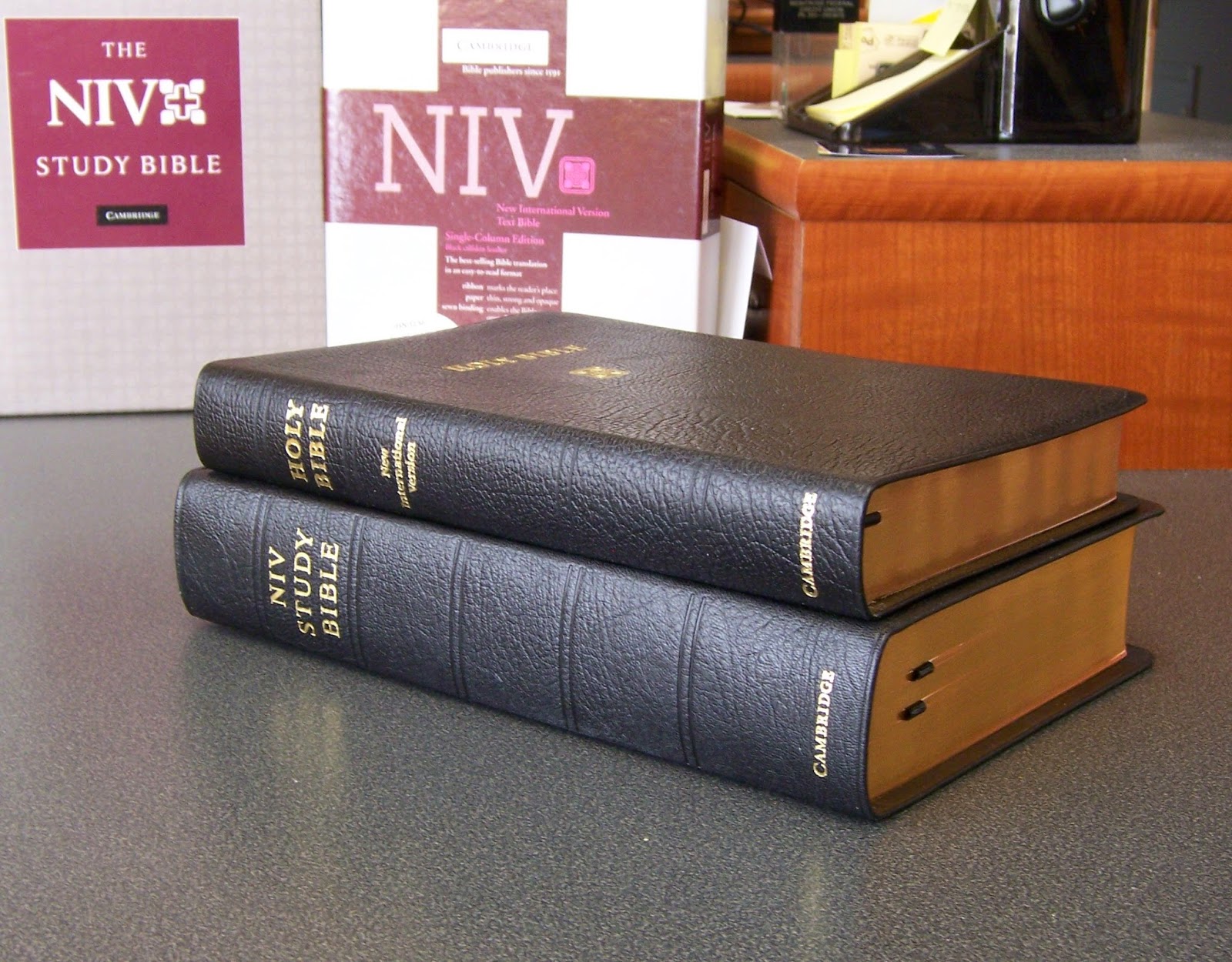 NIV Single Column Text Bible.  Just as the NIV Study Bible remains my favorite study Bible, this single column  text edition remains my favorite Bible for reading.  The text runs across the page just like a novel.  The typeface, 10 point Palatino, is easy to read.  This edition is in calfskin, not as supple as the goatskin on the Study Bible, but a delight to hold, nevertheless. 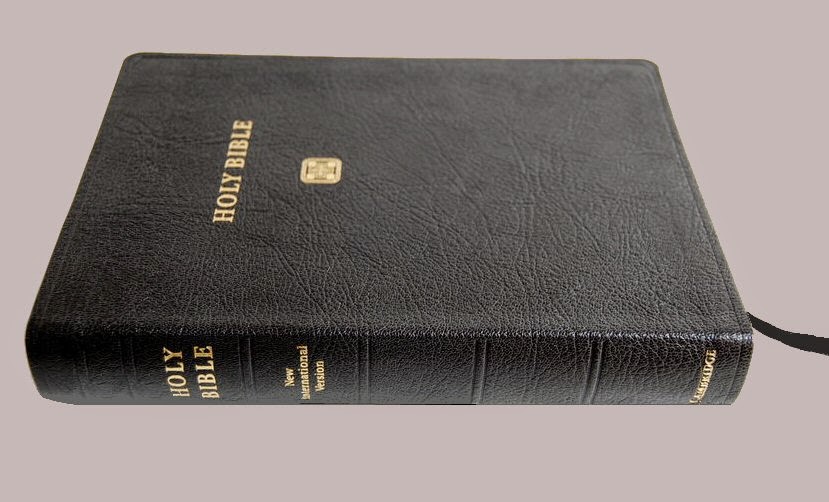 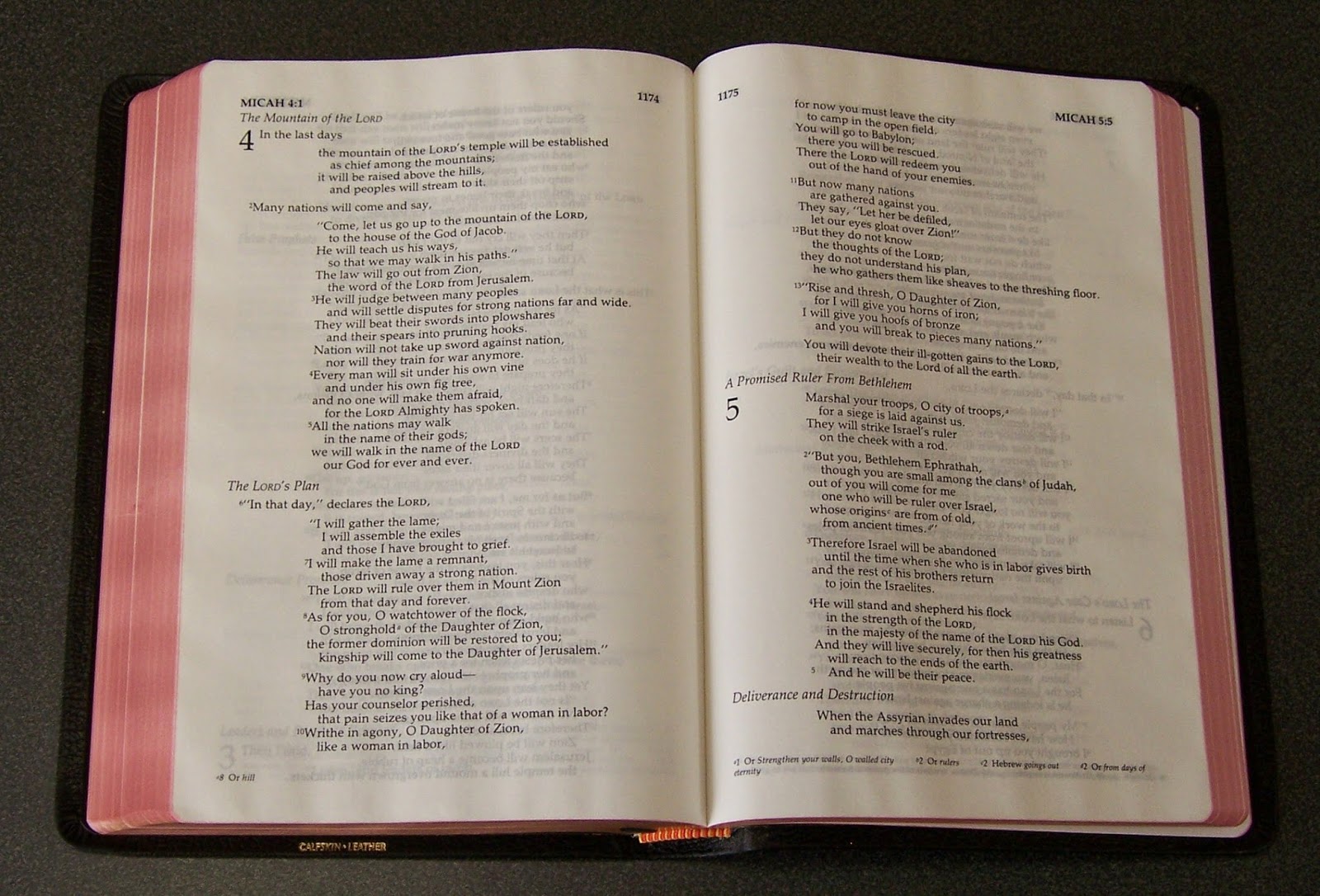 The NIV Single Column Text Bible uses line matching, which reduces ghosting--show-through from the text on the opposite side of the page.  You can see that in poetic sections, like the example above, there is quite a bit of room for ghosting.  Even in prose sections (as in the photo below) there is still ghosting everywhere there is not text on both sides of the page.  Some readers have expressed their dissatisfaction with the amount of ghosting in the NIV Single Column Text Bible.  However, it seems more noticeable in these photos than it does in real life (at least in my experience).  I am ordinarily one of those who is bothered by ghosting, but have not found it to be a problem in this edition. 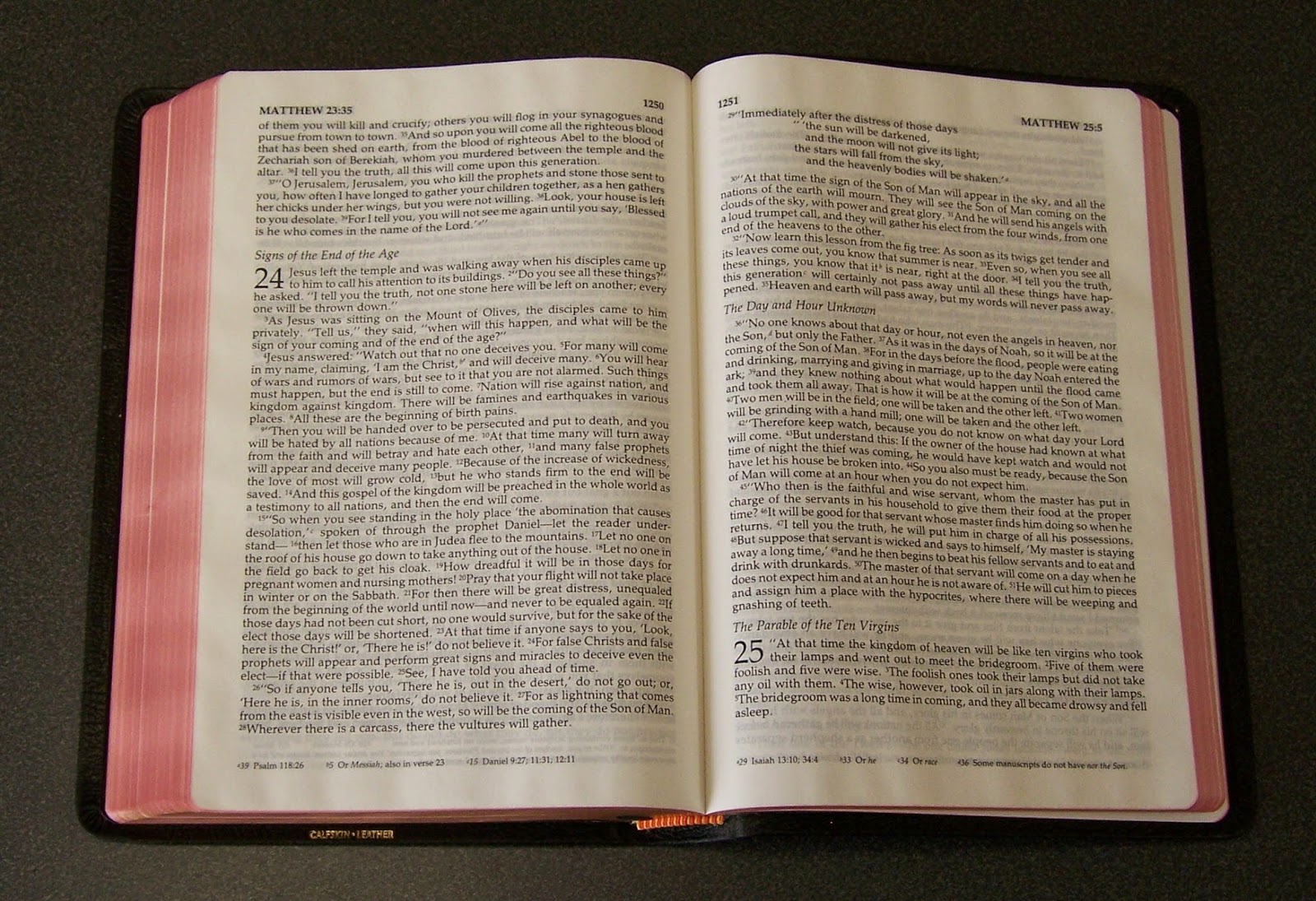 Evangelicalbible.com has one other binding of the NIV Single Column Text Edition worth mentioning, a tan imitation leather version.  I had purchased two of these a couple of years ago, when it looked like I would never see a black goatskin or calfskin edition for sale, intending to have one of them rebound in leather or goatskin.   I still haven't gotten around to rebinding it but will report in a future post how it turns out when I do.

The imitation leather version comes with regular gold gilded edges rather than the art gilt edges of its more expensive calfskin and goatskin siblings.  The binding is still Smyth-sewn and the paper printing quality are the same. 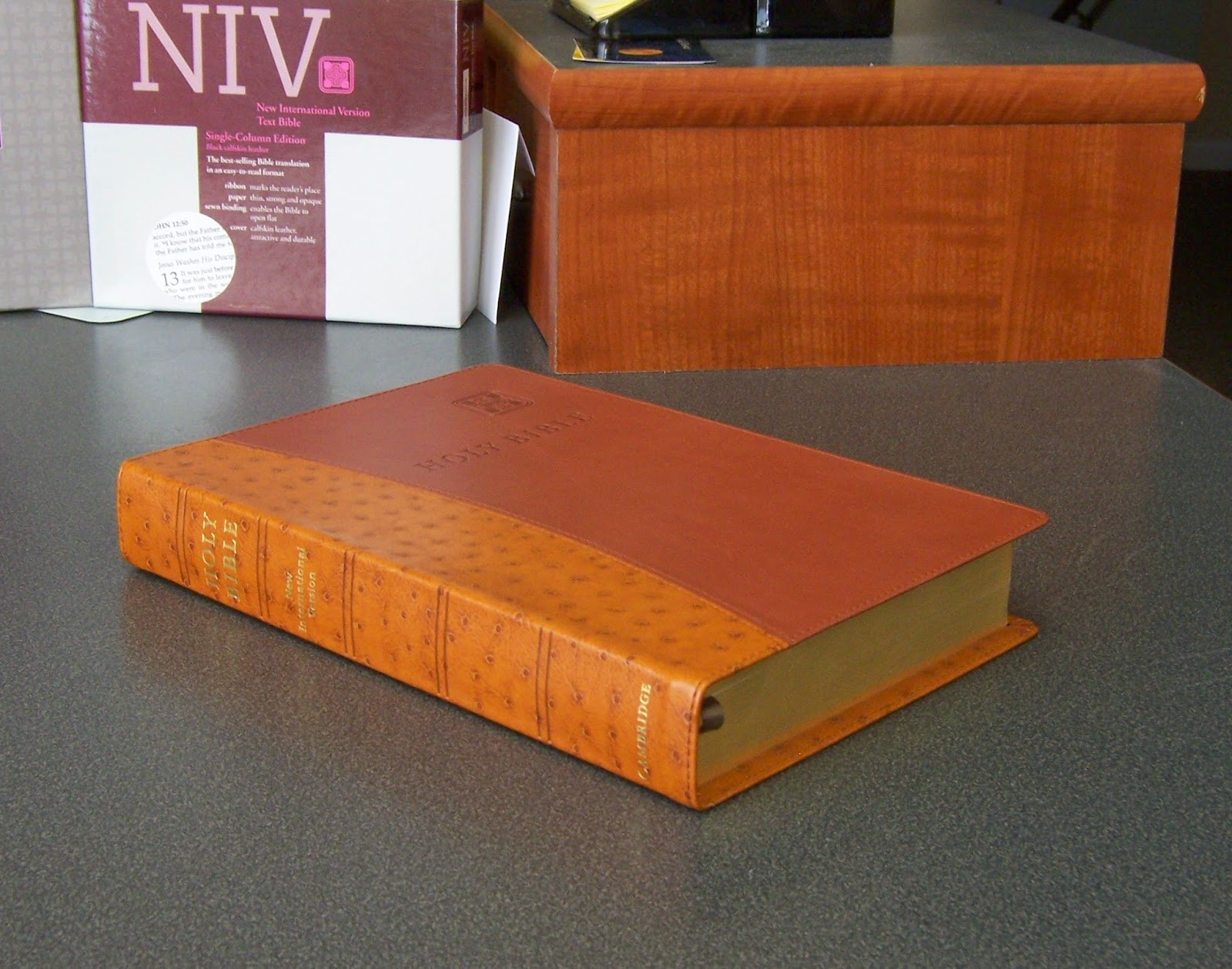 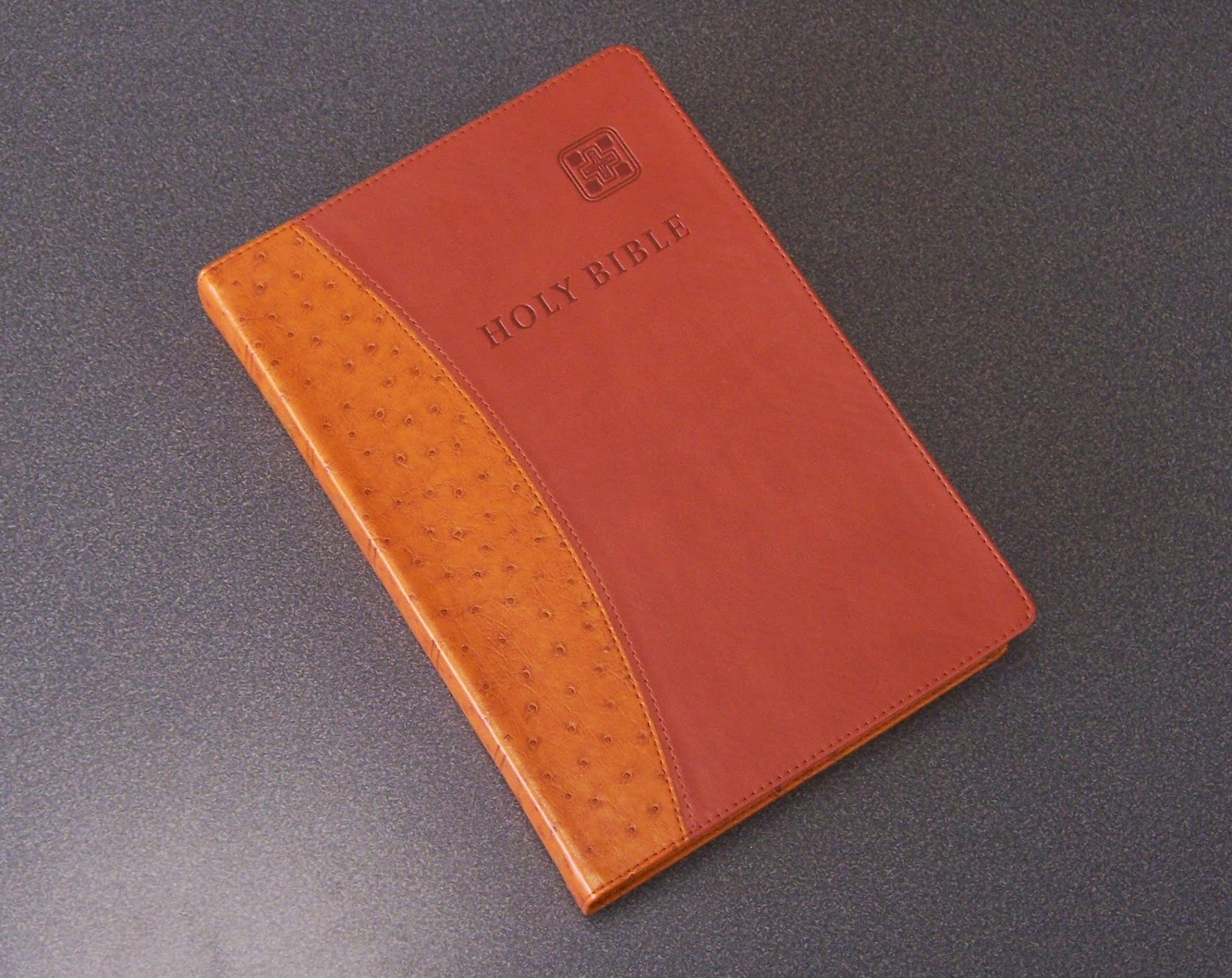 I can report that the imitation leather is very supple--in fact, as supple as the genuine article.  Now, thanks to Cambridge University Press and Evangelicalbible.com, I have a genuine calfskin in my collection. 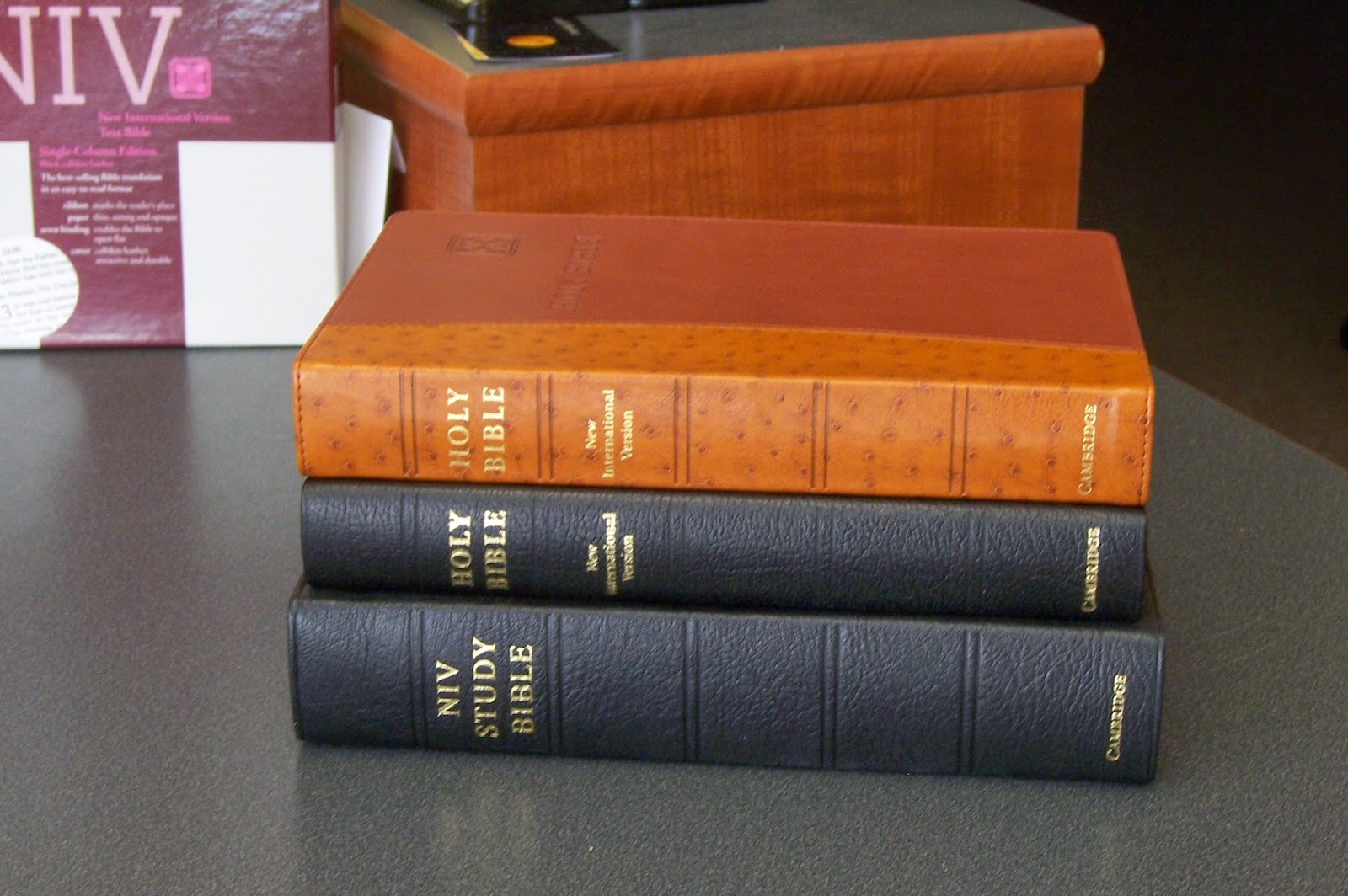 Biblia Sacra Design is where we discuss everything to do with Bible editions and translations, with an emphasis on the best bindings, materials, and formats for presenting the Holy Scriptures.